The ground beneath our feet seems rock-solid, but the surface of our planet is in fact a dynamic grid of sections, which are moving very slowly, these sections are known as tectonic plates. When these large tectonic plates start breaking and shifting they cause the ground to shake, the shaking is called an earthquake.

2. Where are they most likely to happen?

Earthquakes mostly occur on, or near, plates of earth crust. For example; about 200 kilometres off the west coast of Vancouver Island, at the Juan de Fuca plate and Pacific plate. The plates of the world: this is a map showing the Earth and its plates and plate boundaries the Earth consists of. 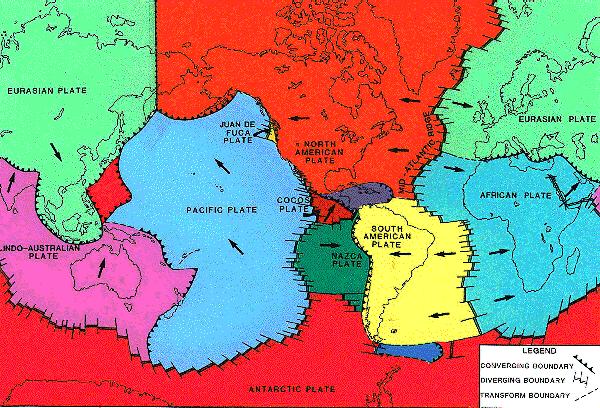 Earthquakes are usually caused when rock underground suddenly breaks along a fault. This sudden release of energy causes (seismic) waves which make the ground shake. When two blocks of rubber for example rub against each other, they don’t slide that smoothly. The rocks catch on each other. This means the rocks are still pushing against each other, but they aren’t moving. After a while, the rocks break because of all the pressure that’s built up. An earthquake occurs when the rocks break. After and even during the earthquake the plates or rocks will start to move again, till they break and another earthquake occurs. The spot underground where the rock breaks is called the focus of the earthquake. The place which is right above the focus (it’s above the ground) is called the epicenter of the earthquake.

Seismic waves can also be caused by explosions underground. Such an explosion may occur when people are making tunnels for roads, railroads, subways and mines. They explode it to let some rock break away. These explosions, however, don’t cause very strong seismic waves. Most of the time you won’t even feel them. Sometimes seismic waves occur when the roof or walls of a mine collapse. This can (sometimes) be felt by people near the mine. The largest underground explosions, from tests of nuclear warheads (bombs), can create seismic waves very much like large earthquakes.

4. How are earthquakes measured?

The vibrations which are produced by an earthquake are detected, recorded, and measured by special instruments called seismographs. A seismograph makes zig-zag lines, these lines together make a “seismogram.” The seismogram reflects the (changing) intensity of the vibrations. It reflects them by responding to the movement of the surface beneath the seismograph. From the date expressed in the seismogram, scientists can decide the time, the epicentre, the (focal) depth, and the type of faulting of an earthquake and then they can estimate how much energy was released. 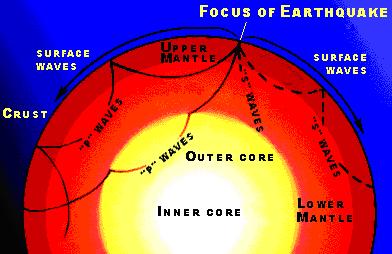 5. Can earthquakes be predicted?

It’s very hard to predict them. But scientists have a pretty good idea why they happen and we can trace a history of when they have happened in the past. But it’s not as obvious as when they look at animals. They do predict them. Animals behave differently when they sense earthquakes. E.g.: a group of elephants that were near the area which had a lot of damage after the Tsunami, left the area before the Tsunami hit that area. How elephant knew about the earthquake? The answer is elephant feet have sensors that can sense waves travelling beneath the earth, this explains how the elephants (and other animals) can predict an earthquake is going to happen.

6. What can people do to keep the damage caused by earthquakes as little as possible?

As I just said are earthquakes hard to predict. But there are some things you can do to keep the damage as little as possible.

What happens when an earthquakes it a certain area. It depends of how big the earthquake is. News reports from all over the world show that it’s not always the earthquake itself which causes the damage. An earthquake may cause only a little damage on one place but on another it may be a great disaster. There are some different factors that affect how much damage a given earthquake can cause. Soft soils will shake a lot more than bedrock, and cause a lot more damage. Building methods will also affect how well a building will ride out the quake. There are things you can do to keep the damage as little as possible before, during and after an earthquake.

This was my project concerning earthquakes. I hope you liked it! I liked to working at it!