Energy exists in many forms, this are the main forms:

We use many different sources of energy to provide everything we use in our everyday lives.

Nuclear fusion in the sun

At the centre of a star it’s so hot that hydrogen nuclei move fast enough to fuse together, to form helium. Than energy is released which is radiated from the sun’s surface as electromagnetic waves.

Energy from the Sun’s light

Biomass; the amount of matter in a living thing.

Coal is formed from large plants which grew in swamps ± 275 million years ago. They died > fell into swamps, there was a lack of oxygen in the swamp which prevented bacteria growing and decomposing the dead plants. The plants formed peat > the peat became buried and was squashed by the rocks formed above. The increase in pressure squeezed the water out of the peat and warmed it. These processes slowly changed the peat into coal.

Solar cells are made from materials which converts some of the energy in sunlight into electrical energy.

Energy from the Sun’s heat

Most of the energy from the sun is in the form of infrared radiation. This warms the earth and the atmosphere.

Movement of the atmosphere

The air nearest the Earth’s surface warms the fastest and then rises. It’s replaced by cooler air. The cycle repeats itself every time.

Energy from nuclear reactions on Earth

The unstable elements (in the Earth) are called radioactive elements. As the become stable they release particles and energy. We use energy from radioactive materials (found in and below the Earth’s crust).

The atoms of some heavy elements such as uranium can split into two smaller, more stable atoms. This process, called nuclear fission, releases large amounts of energy.

Heat energy in the Earth

There are radioactive materials beneath the Earth’s crust which releases energy that heats the core and mantle. Under the crust water heats and forms geysers. The heat in the rocks under the crust can be used as a source of energy. Than cold water is pumped down to the hot rocks where it is turned to steam. Through pipes it is returned to the surface. Then it’s used to generate electricity in a power station.

The Moon, the Sun and the tides 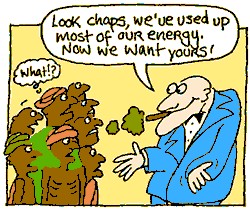 Water in oceans is pulled down by the Earth’s gravity and by the gravitational pull of the moon and to a smaller extent by the gravitational pull of the Sun. Difference in force causes the water beneath the moon and on the opposite side of the Earth to rise up slightly, causing high tide. The level of water in other parts of the ocean falls, causing a low tide at those places.

Twice a month the Sun and the Moon are in line as the Moon orbits the Earth. At these times the difference in the sea level at high and low tide is greatest as the (small) gravitational pull of the Sun reinforces the effect of the stronger pull of the Moon. The tides are than called spring tides.

The sources of energy are divided into 2 groups.